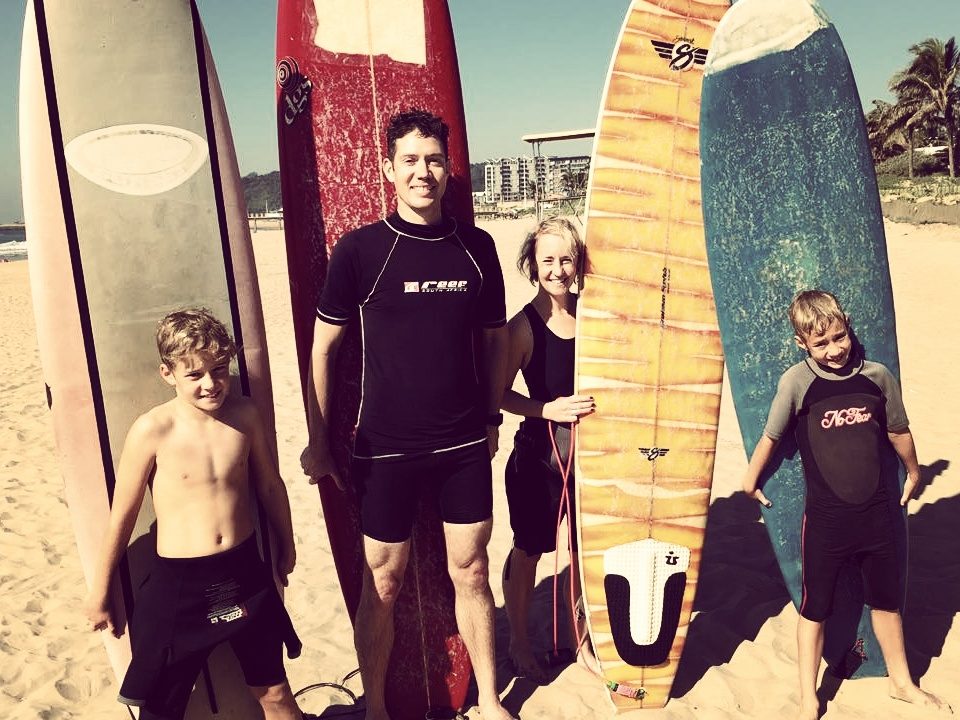 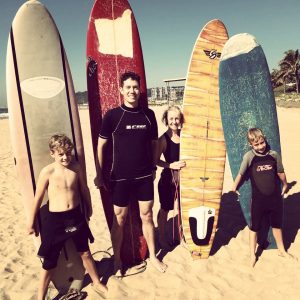 “I must say a word about fear. It is life’s only true opponent. Only fear can defeat life. It has no decency, respects no law or convention, shows no mercy. It goes for your weakest spot, which it finds with unnerving ease.”

I felt weightless, like a bird riding on the wind. The ocean, with all its tremendous power and grandeur, embraced me and I felt part of something bigger than myself. On top of that surfboard, I encountered euphoria, unbelief, hysteria and freedom all at once. I didn’t want it to stop and I drank up every second of this salty souvenir.

But to think I was consumed with fear about this moment. The surfing lesson was a gift from my husband, for my 40th birthday.

“You know I’m scared of the ocean and sharks and currents! Do you even love me?” “You need to conquer your fear and start living. You know what they say about life beginning at 40!” he replied with a wry smile.

Our destination was Durban, a coastal city in Eastern South Africa. When we arrived at our French Art Deco hotel on the Golden Mile beachfront, the dense humidity carried the fragrant smells of Indian cuisine. Maybe because they boast the largest Indian population, outside India. There is also evident African and Colonial influences that all adds up to earn the title of “coolest city in South-Africa, you’ve never seen.”

On the day of my dreaded lesson, we met up with the gnarly guys from Rip Curl Surf on the Promenade. An older surfer dude escorted us to a moldy dark store room with hundreds of canoes and surfboard hanging and standing all over the place.

“We need to get you guys into wetsuits,” he said and handed me a wet, wetsuit. (Who but Halle Barry looks good in a wetsuit, anyway?)

A younger surfer dude (with a six-pack and big biceps) came to help us pick out the right surfboard. The kids were so excited and my husband kept looking at me with that I-know-something-you-don’t-know, type of smile. Under the gazebo, we applied some sex-wax to the board. It smelled like heaven on a tropical island, but still, I didn’t realize that this smell will become one of those reserved for my happy place.

We had to carry our own surfboards to the beach and I could see people laughing at us from behind their hands. “Look at those Benny’s (non-locals) wanting to go surf!”

On our way to the best waves for beginners, quite a few Rickshaw runners passed us. They are traditionally clothed in Zulu attire, with colourful beadwork and imposing feathery headpieces. Tourists pay them for a ride in their two-wheeled hands-pulled cart. Their biggest party trick is when they jump up into the air, swaying the passenger back and forth in their seats.

Apart from them, there were teenagers on skateboards, tourists on bicycles and focused runners passing us. We even saw a whole bunch of Pug enthusiasts walking their dogs. An evident culture of tolerance and ease.

We arrived on the beach and the younger surfer dude and his even more masculine side-kick gave us a lesson. Exactly like in the movies. I always knew about Shaun Thompson, the South African surfing legend, but only realized then that his surfing educated took place in the same water where we are about to enter.

At first, the salty sea water washed every inch of apprehension out of my system as I struggled to stay on my board. Once my balance and downward dog stretch kicked in, I was surfing all the way to the beach. This is where my story began, but it’s not where it ended.

While I lay stretched out on my surfboard watching the ocean, like a real Wahine (female surfer), I realized that my fear was so small in comparison with this moment. The ocean was shining with bits of diamonds dancing on the waves as I breathed in all the healing salty air my lungs could take.

Back on the beach, the young surfer dude noticed my leg bleeding.

“It must have been the fins of the surfboard that scratched me while I was rough and tumbled by the waves,” I said with a smile.

And this is where my story ends, with blood streaming down my knee. For the first time, I understand why people tattoo monumental memories on their bodies. This scar will be my monumental remembrance of the day I conquered my fear and found a new lease on life. This chick definitely digs her new scar! 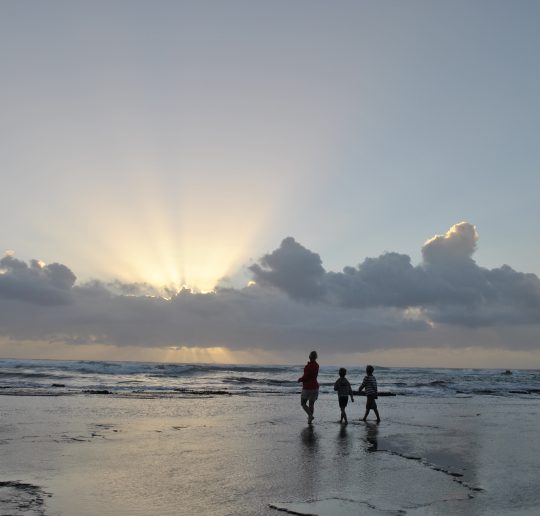 Chronicles of a courageous camper at Mabibi, South Africa.

Royal Hotel Bethulie: the one and only Book Hotel in South Africa.